The United States does not have a national standard or requirement for firearm safety training prior to purchasing a gun, putting the responsibility on gun owners and those who live with them to find ways to learn firearm safety. Only about three in five U.S. firearm owners have received any formal gun training, according to a new study from the University of Washington.

“This percentage has not changed much in 20 years, said Dr. Ali Rowhani-Rahbar, an associate professor at the UW School of Public Health’s Department of Epidemiology, who led the study. “What’s more surprising is how the content of these trainings have not been adapted to talk about one of the greatest risks associated with owning a firearm or living in a gun-owning household—suicide.” 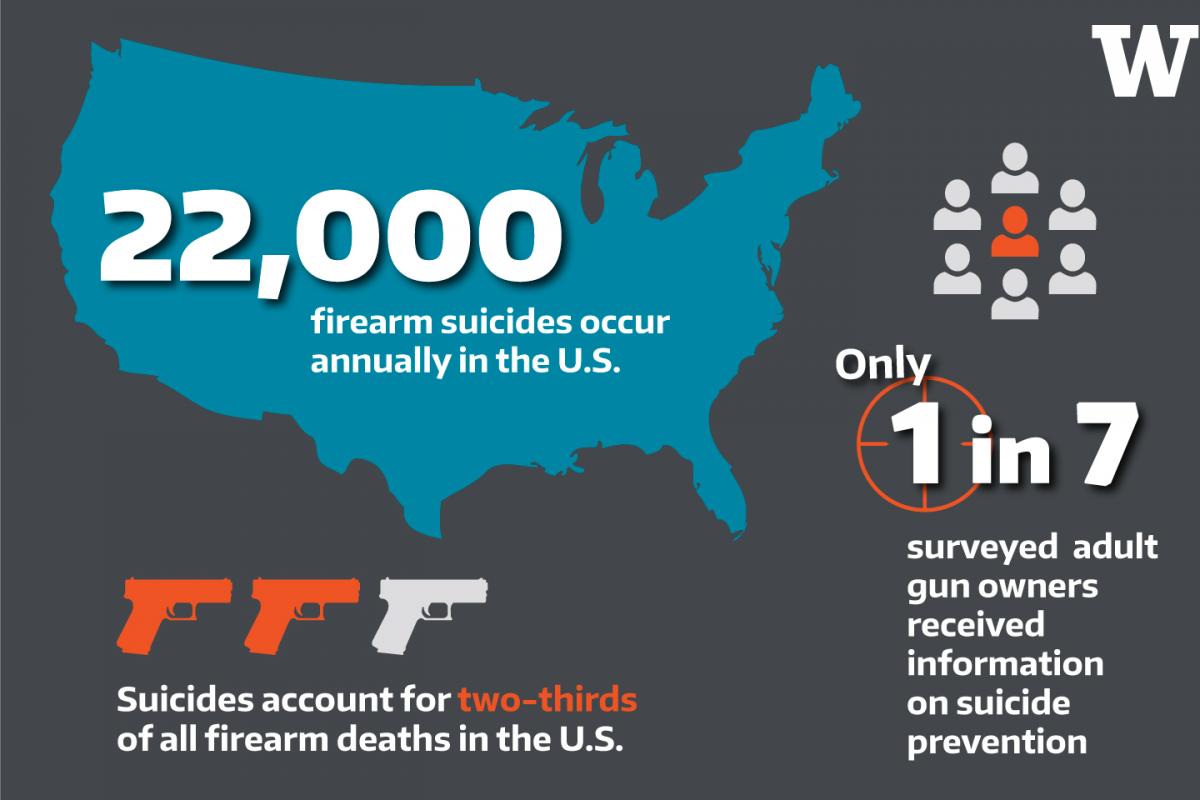 Suicide rates in the United States are on the rise, according to the Centers for Disease Control and Prevention. They account for two-thirds of all firearm deaths in the country and up to 80 percent of all firearm deaths in Washington State each year. This rate is especially high among middle-aged populations between the ages of 45 and 64. Yet, only 15 percent of the study participants who were gun owners reported having received information about suicide prevention.

Firearm training classes, regardless of their setting (gun shops, hunting clubs, shooting ranges, etc.), can promote awareness about the signs of suicide in household members and encourage gun owners to keep their firearms from those individuals until they recover or at least store them safely so others cannot access them.

As a result, Rowhani-Rahbar and PhD student Vivian Lyons used data from a nationally representative online survey to get up-to-date estimates about firearm training in the United States. Analyzing the data from the nearly 4,000 participants, Rowhani-Rahbar and his team found that only 61 percent of all gun owners and 14 percent of non-owners living with a firearm owner have received any formal gun training, a ratio that has not changed significantly since the 1994 survey. The results were published online on July 11 in the journal Injury Prevention.

When asked about the content of firearm trainings, survey participants commonly reported learning how to safely handle and store a gun, and how to prevent accidents. Yet, only one in seven participants reported training on suicide prevention. This is the first study to report on the frequency of covered safety-related content (e.g., preventing accidents, theft or suicide) in formal gun trainings.

When looking at the demographics of those who own guns, more men (66 percent) than women (49 percent) received formal training. Those who reported buying a gun for personal protection were less likely to have received training than those who owned a gun for activities like hunting or sporting.

“The results of this study suggest that we could be doing a much better job with firearm trainings for all gun owners and non-owners living with a gun owner,” said Rowhani-Rahbar. “The link between firearm access and suicide is strong and well-documented. Gun training provides a valuable opportunity to include educational messages about suicide prevention.”

Guns can be found in one-third of U.S. homes. When they are present in the household, researchers have found that the risk of firearm injury—including self-inflicted and unintentional injury—increases for everyone living there, especially when guns are not locked, unloaded, and stored in a safe place.

Other high-income countries, including Canada, Australia and Germany, have national standards that require some kind of safety training or exam before one can legally own a gun. By comparison, the United States has no minimum national standard or requirement for gun ownership, even though several surveys and national polls show that most U.S. citizens favor policies that would require formal firearm training before becoming a qualified owner.

Rowhani-Rahbar worked on this study with colleagues at Harborview Injury Prevention & Research Center at the University of Washington, the University of Colorado-Denver, Harvard University, and Northeastern University. The study was funded by the Fund for a Safer Future and the Joyce Foundation.