Dr. Bennet Omalu practices the science of death. He is a forensic pathologist and investigates the specific cause and manner of death, particularly in cases where it has not occurred by natural causes.

He has investigated over 12,000 cases, but one changed his life forever. 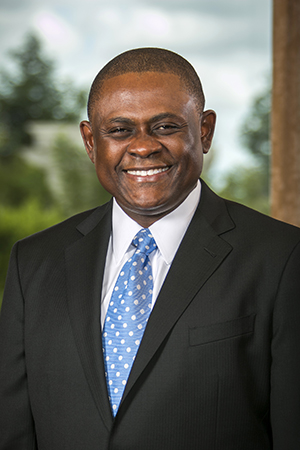 Early in his career, working at the Allegheny County Coroner’s Office, Omalu was assigned the corpse of Mike Webster, former Hall of Fame center for the Pittsburgh Steelers. Webster had died of a heart attack at the age of 50.

Nicknamed “Iron Mike,” Webster had struggled in his retirement from football. For years prior to his death, he battled symptoms resembling depression, dementia, and amnesia. He experienced fits of rage and confusion, drained his assets, and even went through a period of homelessness. Football had taken a toll.

After reviewing the case, Omalu began the autopsy expecting to find obvious trauma to his brain. But when he looked inside Webster’s skull, there were no signs of injury. He reviewed the CT and MRI scans. All negative. Yet somewhere in the core of his being, Omalu knew this football player had been victim to the game and he couldn’t let it go.

Had he known the path his ambition would take him down, Omalu may have blamed Webster’s tragic death on a family history of mental illness and moved on. After all, he had come to the U.S. seeking a simple life. Born in Nigeria and fresh out of medical school, Omalu arrived to the U.S. as a World Health Organization Visiting Scholar in the Department of Epidemiology at the University of Washington’s School of Public Health. It was there, he says, that he began his journey into public health and solidified his dedication to “enhance humanity.” It was this conviction that, years later, compelled Omalu to find the source of Webster’s downfall. The once unknown physician would never know a quiet life again.

For months, Omalu poured over research and eventually sent slices of Webster’s brain out for staining. When the specimens returned, he examined them under a microscope. Sure enough, they showed a buildup of Tau proteins, key signs of the degenerative disease he later named chronic traumatic encephalopathy, or CTE.

Omalu enthusiastically presented his findings, thinking the world - particularly the NFL - would have a keen interest in his discovery. Instead, he was met with opposition and anger. His assertions went counter to the very ideals of American culture, some said. He was ridiculed and marginalized. His tireless work, which he thought would enhance the lives of players, was aggressively rejected. 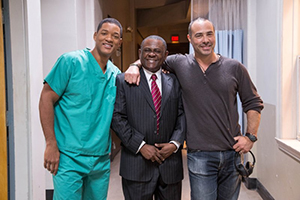 But Omalu’s story is one of great resolve.

“When the NFL and other doctors in America denied my work, I kept the faith that what I was doing was for the good of all of us and that we together would prevail,” he says.

Over the ensuing decade, not once did he consider retracting his research. In fact, it was brought into the limelight in 2015 when his life was dramatized in the movie, Concussion, starring Will Smith as Omalu.

Since that time, Omalu has met and talked to many sufferers of this disease. He is comforted in knowing that his persistent examining and questioning has given a voice to the voiceless. 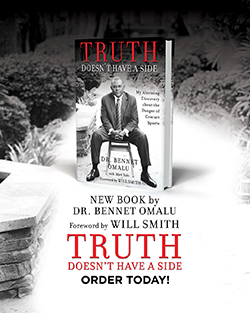 It has been 12 years since the first stories of CTE hit national media and Omalu is still asking unpopular questions. In his recently published book, Truth Doesn’t Have a Side: My Alarming Discovery About the Danger of Contact Sports, Omalu takes the stance that no child under the age of 18 should play contact sports.

The big six are: American football, ice hockey, mixed martial arts, boxing, wrestling, and rugby. These sports, he says, you cannot make safe because blows to the head are intrinsic to the game. The science to date indicates that repeated blows to the head, with or without concussion, increase the likelihood of suffering brain damage. That brain damage may manifest immediately or over time, sometimes up to 40 years later.

“Knowing what we know today, there are certain types of sports that are potentially harmful to your child,” Omalu says. “When your child plays these games, his or her mind and intellect are damaged, even after just one season.”

Despite the harsh criticism Omalu has faced over the years, his passion for uncovering the truth has never wavered.

“If you learn from my story, what made me successful is that I refused to conform to the definition and expectations other people had of me,” says Omalu.

When asked what he’s most proud of, he pauses only for a moment.

“People all over the world have told me that what I have done and continue to do has impacted millions of lives,” he says. “That’s my consolation.